About a week ago, my brother gave me his 3D printer. I had started printing some tests, and then I printed started to print mask relief straps, mask relief straps are straps for when you are wearing a mask that goes around your ears it sometimes hurts your ear, so these are for the back of your head here is the model for it on a 3D printing website. But when I printed some, the problem was is that it was meant for people who have a lot of hair on the back of their heads; otherwise, it slips down. But I looked around a little more on Thingiverse, and I found a remix of it with a comb, Here is the model for that. The next day my Mom had needed me to print about 100 of them for the masks that she is selling. So I started printing but, the 3D printer that Nicholas gave me could only print one at a time and it took 40 minutes each so my brother Nicholas brought over his other 3D printer the Ender-3 and I started printing on there. I print about 25 mask relief straps a day. Here is a timelapse of the ender-3 printing mask relief straps:

We use soap every day for bathing, washing our hands, etc. Before soap was invented, the Romans had used oil then they would scrape it off with a metal scraper. We do know for sure when soap was, invented, but there is a story of how the Romans were sacrificing animals on a mountain called Mt Sapo, the animal fat combined with the ashes created soap. But that is probably not a true story. Ancient Egyptians had also written down on a papyrus a recipe for soap, but we are not sure if that was just used for cleaning the wool when they made clothes.

But around 200 AD, there was a man named Galen, who was a doctor for several Roman emperors. He wrote down that the best soap came from the Germans and the Gauls. In 500AD there was a soap guild in Italy, in 1200 AD England started making large quantities of soap, in 1400 AD France also began to make lots of soap near Marseille, and in 1800 AD there were soap factories.

Soap is made with Lye and animal fat or plant fat. The process for mixing them is called Saponification.

Yesterday I went on a walk from our house to the cottonwood creek and explored around that area (btw the cottonwood creek feeds into the Sacramento River). Then I walked to our community campground explored that area for a while. Then I went back to the creek, but instead of taking the usual path, I took a different way that led into the swamp. The swamp is a very wet and muddy place that is right next to the creek, so I called it the swamp. Here is a map that I drew on my computer of the creek area: 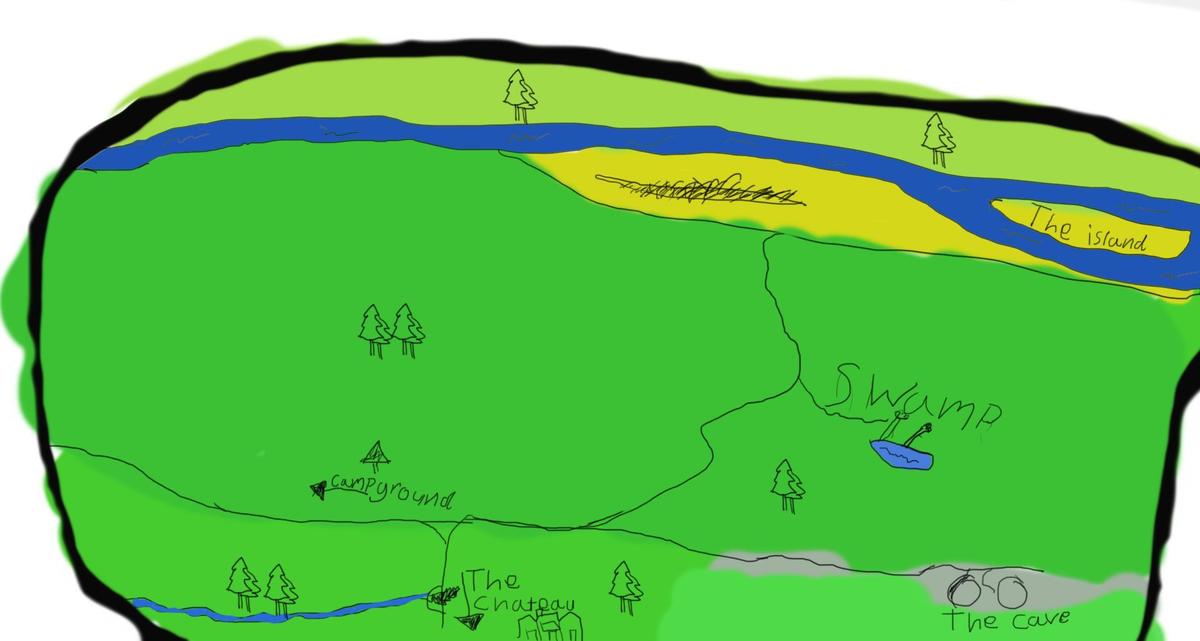 My Dad and I had chopped our walking sticks from one of the trees in the swamp, and now we use them every time we walk down to the creek. The reason why I had walked down to the creek area is that I was looking for an excellent spot to build a hut with my Dad. Unfortunately, I didn't find one, but we are going to walk down there again later today to look again
Tweet

About a year ago, we had been given an old 2009 iMac from some of our friends. The iMac was slow, but we used it for our schoolwork. I had wanted to reset the computer, but I wasn't sure if it would ruin the computer or not, but eventually, I decided to reset the computer. Well, it didn't work, it had not gone back to its original program, and since I never created a backup, it was just stuck in the "select a drive" state. I had worked hours trying to get it to work. But nothing I did worked, so the iMac just sat there in my room for about three or four months. Until recently when I remembered that Nicholas had installed Ubuntu on a USB flash drive for his desktop computer, so I looked up how to install Ubuntu on a mac computer it said " to plug in the USB flash drive then turn on your mac hold down alt/option and select the USB drive and then press the install" I followed the steps, and it started installing Ubuntu. I was very excited that it was going to work finally. I went through the ubuntu setup process then it was set up and ready, except for one thing the wireless internet chip driver for Ubuntu wasn't installed, so I looked up how to fix that, and there was a lot of answers that I tried, but none of them worked. I don't know whether I didn't do the instructions right or not or if the version was wrong. But I skype called my brother, Nicholas, who has used Ubuntu before and who would know how to fix the problem. I had screen shared my screen on the iMac, and he helped me fix the problem. I didn't understand everything that he told me to do, but he said that the computer needed a CD for installing the driver for the wireless internet chip. But he was able to make the USB flash drive seem like a cd to the computer, and the computer downloaded the driver. The iMac is now working, and I use it for schoolwork and skype.